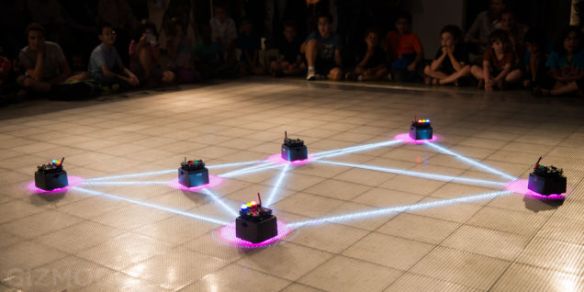 Dr. James McLurkin has a swarm of robots. Individually, theyre not that smart, but a crateful of them behaves in some very complex ways, like the bees that inspired them. Gizmodo got to see the wee machines in action, and while theyre adorable, they represent some serious future bot capabilities.

Dr. McLurkin, a professor of computer science, runs the Multi-Robot Systems Lab at Rice University. He and his team research distributed algorithms for multi-robot systems. In other words, using the combined abilities of several rather simple robots to perform complex tasks. Dr. McLurkin has spent the past three years developing Robot Swarm, an exhibit of his hive-mind bots set to debut at Manhattans Museum of Mathematics in early 2015. This week, Dr. McLurkin gave a sneak preview of the exhibit, and Gizmodo was there.