This has to be one of the most awesome headlines I have ever seen while curating news for this blog! 🙂

For the past few months, Google has been feeding text like this to an AI engine — all of it taken from steamy romance novels with titles like Unconditional Love, Ignited, Fatal Desire, and Jacked Up. Google’s AI has read them all — every randy, bodice-ripping page — because the researchers overseeing its development have determined that parsing the text of romance novels could be a great way of enhancing the company’s technology with some of the personality and conversational skills it lacks.

And it’s working, too. Google’s research team recently got the AI to write sentences that resemble those in the books. With that achievement unlocked, they’re now planning to move on to bigger challenges: using the conversational styles the AI has learned to inform and humanize the company’s products, such as the typically staid Google app. READ MORE: Google Is Feeding Romance Novels To Its Artificial Intelligence Engine To Make Its Products More Conversational | BuzzFeed News 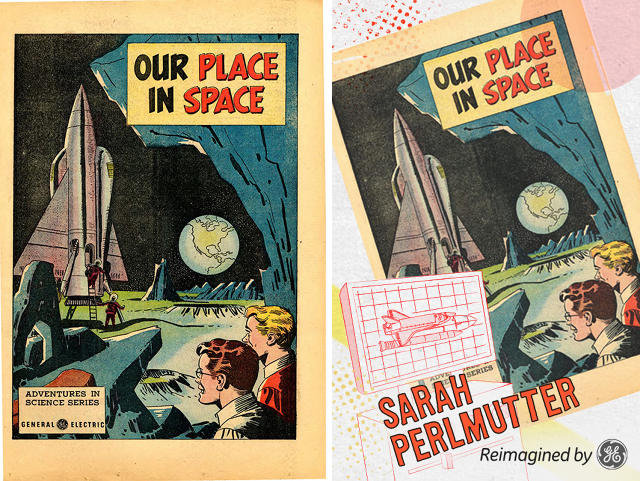 Back in the 1950s and 60s, General Electric created a comic book series to help spark interest and excitement in science and engineering. Now the brand has teamed up with Wattpad to bring “Adventures in Science” back to life for a new generation, but with a bit of a twist.

The comic covers still look straight out of the ’60s, but the brand invited six of the writing social app’s most popular writers to create new science-fiction inspired by the old school comic series. The new fiction…is based on the real work of GE scientists and tackles topics from GE’s digital industrial portfolio like transportation, power and water, health care, and energy. READ MORE: General Electric And Wattpad Combine Modern Science With Old School Sci-Fi Comics | FastCompany

Samim Winiger, whose work we’ve covered recently–sent along his latest experiment. He used an open-source neural network that was trained on 14 million passages of romance novels by Ryan Kiros, a University of Toronto PhD student specializing in machine learning. Called the Neural-Storyteller, the network was trained to analyze images and retrieve appropriate captions from its vast store of sexy knowledge, creating “little stories about images,” says Kiros.

And what stories! Winiger fed the network a series of images, and it’s hard to even decide where to begin…Not all of the stories (or any of them, really) make perfect sense: What we’re seeing is an artificial neural network struggle to identify objects in a photo, and make links between images and the passages that it’s trained on. READ MORE: It Was Inevitable: Someone Taught a Neural Network To Talk With Romance Novels | Gizmodo

Lionsgate has won a bidding war to adapt Patrick Rothfuss’ The Kingkiller Chronicle series! And not just into a movie, or a television series—but both, and a video game, to boot! This deal sets up the studio to develop the multiple stories from The Name of the Wind, The Wise Man’s Fear, and various novellas (including The Slow Regard of Silent Things) simultaneously and across multiple platforms. READ MORE: Patrick Rothfuss’ The Name of the Wind to Be a Movie and a TV Show | Tor.com

No explanation is given on how this list was determined or the source for the “most popular” rankings. I definitely do not agree with all the selections!

Blockbuster releases are homogenising around a narrow range of experiences and it could be driving creative people out of the industry. READ: Video games have a diversity problem that runs deeper than race or gender | Technology | The Guardian

One of the best parts of science fiction and fantasy books is that they let our minds go to places where reality can’t follow. Recently creators have taken an interest in visually showing us these impossible places, and we love it. Here are 10 books that we think can’t be put on film, but we’re hoping that someone will prove us wrong. READ: The 10 Most Unfilmable Books (That Absolutely Must Be Made Into Films) | io9

“Men and their works have been a disease on the surface of their plane… you cannot go on forever stealing what you need without regard to those who come after.” READ MORE: Dune at 50: Frank Herbert’s Environmentalist Legacy | Flavorwire

SINCE 1953, TO be nominated for a Hugo Award, among the highest honors in science fiction and fantasy writing, has been a dream come true for authors who love time travel, extraterrestrials and tales of the imagined future. Past winners of the rocket-shaped trophy—nominated and voted on by fans—include people like Isaac Asimov, Arthur C. Clarke, Harlan Ellison, Philip K. Dick, and Robert A. Heinlein. In other words: the Gods of the genre.

But in recent years, as sci-fi has expanded to include storytellers who are women, gays and lesbians, and people of color, the Hugos have changed, too. At the presentation each August, the Gods with the rockets in their hands have been joined by Goddesses and those of other ethnicities and genders and sexual orientations, many of whom want to tell stories about more than just spaceships. READ MORE: Who Won Science Fiction’s Hugo Awards, and Why It Matters | WIRED.