News spread Monday of a remarkable breakthrough in artificial intelligence. Microsoft and Chinese retailer Alibaba independently announced that they had made software that matched or outperformed humans on a reading-comprehension test devised at Stanford. Microsoft called it a “major milestone.” Media coverage amplified the claims, with Newsweek estimating “millions of jobs at risk.”

Those jobs seem safe for a while. Closer examination of the tech giants’ claims suggests their software hasn’t yet drawn level with humans, even within the narrow confines of the test used. READ MORE: AI Beat Humans at Reading! Maybe Not | WIRED

Images archived in digital libraries are either born digital or scans/photos of hard copy originals. This technology may be useful in enhancing images of historical photos and documents that are of low quality.

You know how in CSI, the cops always try to “enhance” a shot to zoom in and read (non-existent) details in photos? It’s amusing to the rest of us, but perhaps one day won’t be all that impossible, with artificial intelligence.

Researchers have been adopting neural networks and machine learning technologies to help computers fill in missing detail in photos.

Some consumer-ready websites are already making some of this magic accessible to you and me.

Earlier this month Google’s software engineer Andrew Dai explained to BuzzFeed News that the genre’s formulaic approach to storytelling makes it ideal for machine learning. They hit a sweet spot between the labyrinthine, meandering sentences found in literary fiction, and the less elevated language used in kids’ books.

And in a heartrending plot twist: the experiment worked. The hairy details were released last week, but in short, the AI successfully connected lines of text to related phrases based on frequently connected words and phrases used in romance novels. READ MORE: Here’s What A Robot Learned After Binge-Reading Romance Novels | HuffPost 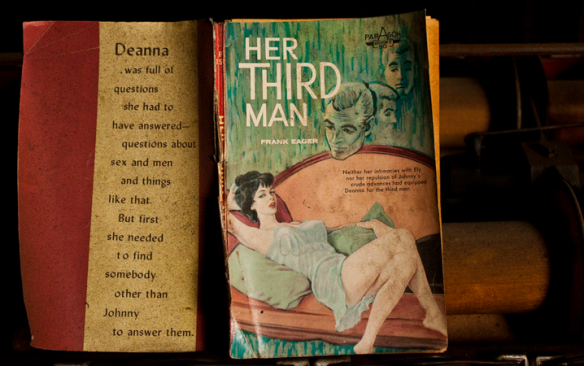 Samim Winiger, whose work we’ve covered recently–sent along his latest experiment. He used an open-source neural network that was trained on 14 million passages of romance novels by Ryan Kiros, a University of Toronto PhD student specializing in machine learning. Called the Neural-Storyteller, the network was trained to analyze images and retrieve appropriate captions from its vast store of sexy knowledge, creating “little stories about images,” says Kiros.

And what stories! Winiger fed the network a series of images, and it’s hard to even decide where to begin…Not all of the stories (or any of them, really) make perfect sense: What we’re seeing is an artificial neural network struggle to identify objects in a photo, and make links between images and the passages that it’s trained on. READ MORE: It Was Inevitable: Someone Taught a Neural Network To Talk With Romance Novels | Gizmodo

For the past few months, a “very large fraction” of the millions of queries a second that people type into the company’s search engine have been interpreted by an artificial intelligence system, nicknamed RankBrain, said Greg Corrado, a senior research scientist with the company, outlining for the first time the emerging role of AI in search. RankBrain uses artificial intelligence to embed vast amounts of written language into mathematical entities — called vectors — that the computer can understand. If RankBrain sees a word or phrase it isn’t familiar with, the machine can make a guess as to what words or phrases might have a similar meaning and filter the result accordingly, making it more effective at handling never-before-seen search queries. READ MORE: Google Turning Its Lucrative Web Search Over to AI Machines | Bloomberg

To make poorly labeled videos easier to discover, Manhattan-based video analysis startup Dextro is launching a platform that analyzes and tags the contents of publicly available videos, using algorithms to identify common scenes, objects, and speech. Mic, a news site aimed at millennials, has partnered with Dextro and will use the platform, called Sight, Sound & Motion (SSM), to discover newsworthy videos that may otherwise be difficult to find. READ MORE: This New Platform Makes The Contents Of Videos As Searchable As Text | Fast Company | Business + Innovation 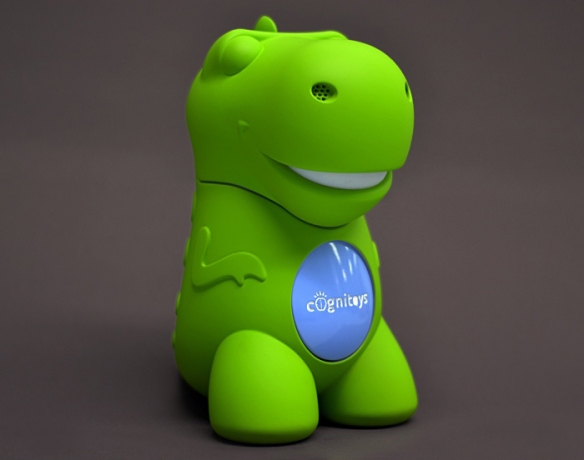 DON COOLIDGE AND JP Benini are bringing cognitive smarts to the world of children’s toys. Coolidge and Benini just launched a Kickstarter for a toy dinosaur toy driven by IBM Watson, the machine learning service based on the company’s Jeopardy-playing cognitive system.

Developed under the aegis of a company called Elemental Path and a project called CogniToys, this tiny plastic dinosaur uses speech recognition techniques to carry on conversations with kids, and according to Coolidge and Benini, it even develops a kind of smart personality based on likes and dislikes listed by each child.

The toy is another example of online machine learning pushing even further into our everyday lives. This is made possible not only by an improvement in AI techniques, but also by the ability to readily deliver these techniques across the net. READ MORE: A Toy Dinosaur Powered by IBM’s Watson Supercomputer | WIRED.

WE’VE LONG KNOWN there’s a market out there for robotic buddies. One compelling piece of evidence: The original Furby sold more than 40 million units, and it didn’t really do anything.

17 years later, an A.I. and machine-learning company is making a robot pal that will do way more than its fuzzy predecessor. It’s called Musio, and it houses a pretty impressive A.I. engine developed by a company called AKA.

The robot remembers details from prior conversations, asks follow-up questions based on that info, and can be used as a smart-home controller. But its main goal is to be your friend: Asking you questions, actually listening to your answers, and learning what you’re all about

READ MORE: This Little Robot Wants to Be Your Best Friend | WIRED

San Francisco startup Vicarious aims to create ‘a computer that thinks like a person except it doesn’t need to eat or sleep’. via Zuckerberg and Musk back software startup that mimics human learning | Technology | theguardian.com.