When linguists talk about the historical relationship between languages, they use a tree metaphor. An ancient source (say, Indo-European) has various branches (e.g., Romance, Germanic), which themselves have branches (West Germanic, North Germanic), which feed into specific languages (Swedish, Danish, Norwegian). Lessons on language families are often illustrated with a simple tree diagram that has all the information but lacks imagination. There’s no reason linguistics has to be so visually uninspiring. Minna Sundberg, creator of the webcomic Stand Still. Stay Silent, a story set in a lushly imagined post-apocalyptic Nordic world, has drawn the antidote to the boring linguistic tree diagram. 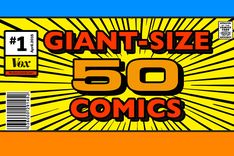 Flip open any comic book and you’ll find a story of overcoming the odds. Whether it’s a web-slinger seeking to make his way in the world, a caped crusader intent on making his city a better place, or a mutant who has to deal with human hate, comic books have always been a beacon of hope for the underdogs of this world. But perhaps the greatest comic book story ever told is that of the books themselves…

Johanna Basford’s first adult coloring book, Secret Garden, was translated into 14 languages, outselling the most popular cookbook in Paris. “I think everyone has a creative spark; they just need the opportunity to let it flourish,” she said. READ MORE: Meet The Woman Who Sold A Million Copies Of Her Coloring Books For Adults | BuzzFeed

In the 19th century, doctors couldn’t use photographs to teach their students to distinguish between benign or cancerous growths. Or how teeth looked in patients affected by hereditary syphilis. Or the stages of cholera.

So the physicians, surgeons, and anatomists of the 1800s built close relationships with artists, craftsmen, and publishers to produce beautiful (yet horrifically off-putting at times) illustrations. In The Sick Rose: Disease and the Art of Medical Illustration, Richard Barnett collects up the best examples of these images. They—and the accompanying chapters of text, organized by disease—are endlessly fascinating.

Excerpted from The Sick Rose: Disease and the Art of Medical Illustration, by Richard Barnett, published this month by Distributed Art Publishers.