Chastened by the negative effects of social media, Mark Zuckerberg says he will tweak his service and upgrade society in the process. Should any company be that powerful? READ MORE: We Need More Alternatives to Facebook – MIT Technology Review

A worrying trend. A way for ordinary citizens to challenge ignorance, censorship, intellectual freedom and freedom of speech is simply to stay informed and be aware of recent events:

The B.C. Court of Appeal has released its decision in Equustek Solutions Inc. v. Jack, a closely watched case involving a court order requiring Google to remove websites from its global index. As I noted in a post on the lower court decision, rather than ordering the company to remove certain links from the search results available through Google.ca, the order intentionally targets the entire database, requiring the company to ensure that no one, anywhere in the world, can see the search results.

MUST READ if you are a librarian…blogger, author, book reviewer, in publishing or editing…love books…Digital publisher Ellora’s Cave sues Dear Author blog for reporting on its financial troubles | Gigaom. This makes me sick to my stomach. I feel for all the authors contracted to the company and unable to reverse their rights. The outcome of the lawsuit is extremely important. The fact the lawsuit was filed in the first place is having a huge impact on the blogging and book reviewing community.

Aside from his point that the system collects too much money, Toups does not philosophically agree with the library’s evolving role in the community.

“They’re teaching Mexicans how to speak English,” the council chairman said in reference to Biblioteca Hispana, a Hispanic-language segment of the Golden Meadow library branch. “Let that son of a bitch go back to Mexico. There’s just so many things they’re doing that I don’t agree with. … Them junkies and hippies and food stamps (recipients) and all, they use the library to look at drugs and food stamps (on the Internet). I see them do it.”

Decision in French court comes after former head of Formula One said that showing images breaches his privacy.

The important consideration in this story is the following snip:

The decision is a setback to Google as it tries to defend a global stance that the search engine is merely a platform that delivers links to content and it should not be responsible for policing them.

Although Google can delete images on its website, it cannot prevent others reposting them, resulting in a constant game of catch-up.

In a statement, Google said the court’s request would require it to build a new software filter to continuously catch new versions of the posted images and remove them.

“This is a troubling ruling with serious consequences for free expression and we will appeal it,” said Google’s associate general counsel Daphne Keller in a statement.

Here in the US, it’s easy to slip into the comfortable idea that the internet is unrestricted, a home for free speech and exploration, whether it’s meaningful and important, or dumb hashtags. It’s not that way everywhere though, and Freedom House has mapped out the current state of affairs across the globe.

Read and see more charts:  A Map of Internet Freedom Around the World | Gizmodo 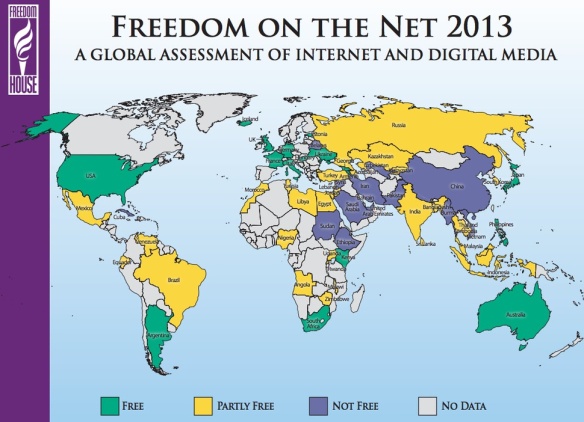 An Oregon middle school educator tries to paint his mocking students as hackers in order to bring an action against them under the Computer Fraud and Abuse Act.