Rosa Parks was more than just the woman who refused to give up her seat on a segregated bus in 1955. Letters and photos that belonged to the civil rights activist offer new insights into her complexities. Parks legacy has been somewhat simplified by the history books.

Her archive goes on display for the first time on [February 4, 2015] at the Library of Congress, after long legal disputes hid the documents from public view for years. Researchers and the public will have full access to Parks archive of letters, writings, personal notes and photographs for the first time. About 7,500 manuscript items and 2,500 photographs from the civil rights activist, including a pocket-sized Bible, letters from admirers and her Presidential Medal of Freedom, are part of the collection.

CDs may not be the first thing to come to mind when you think of the Library of Congress, but it houses more than 500,000. The extensive collection includes everything from music to maps and labs where researchers are destroying CDs to learn how to preserve them, CBS News Jim Axelrod reports.

In 1982, Billy Joels album “52nd Street” was the first commercial compact disc to be released. Since then, hundreds of billions of CDs have been sold worldwide. Once the latest music technology, the CD is now a collectors item, replaced by digital downloads. But those who built up music libraries in the 80s and 90s may wonder how long will those discs work? Fenella France, chief of preservation research and testing at the Library of Congress, is hoping to figure that out.

READ MORE: Library of Congress cooks CDs in quest to save them | CNET 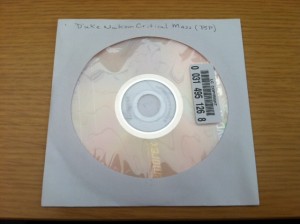 Several months ago, while performing an inventory of recently acquired video games, I happened upon a DVD-R labeled Duke Nukem: Critical Mass PSP. My first assumption was that the disc, like so many others we have received, was a DVD-R of gameplay. However, a line of text on the Copyright database record for the item intrigued me. It reads: Authorship: Entire video game; computer code; artwork; and music. I placed the disc into my computer’s DVD drive to discover that the DVD-R did not contain video, but instead a file directory, including every asset used to make up the game in a wide variety of proprietary formats. Upon further research, I discovered that the Playstation Portable version of Duke Nukem: Critical Mass was never actually released commercially and was in fact a very different beast than the Nintendo DS version of the game which did see release. I realized then that in my computer was the source disc used to author the UMD for an unreleased PlayStation Portable game. I could feel the lump in my throat. I felt as though I had solved the wizard’s riddle and unlocked the secret door.

Like it or not, CDs rot over time — your well-worn copy of Soundgarden’s Superunknown might not play anymore. Just how they rot is frequently a mystery, though, which is why the Library of Congress is currently destroying CDs (including those you donate) in hopes of improving its archival techniques. Researchers are using a combination of artificial aging tests and simple observations to see what factors trigger decay, sometimes with surprising results. As the Library tells The Atlantic, data loss varies widely between manufacturing processes, the lasers in CD players and even individual discs; experimenters can subject two identical copies of an album to extreme heat and lose only one of them.

Read More: The Library of Congress is wrecking CDs to learn how to save them | Engadget

A huge pyramid in the middle of nowhere tracking the end of the world on radar, just an abstract geometric shape beneath the sky without a human being in sight: it could be the opening scene of an apocalyptic science fiction film, but it’s just the U.S. military going about its business, building vast and other-worldly architectural structures that the civilian world only rarely sees.

The Library of Congress has an extraordinary set of images documenting the Stanley R. Mickelsen Safeguard Complex in Cavalier County, North Dakota, showing it in various states of construction and completion. And the photos are awesome. Read more:  A Pyramid in the Middle of Nowhere Built To Track the End of the World | Gizmodo

A conclusive study by the Library of Congress reports that only 1,575 of the nearly 11,000 films produced during the silent era still exist in their complete form. The study was commissioned by the National Film Preservation Board and written by historian and archivist David Pierce.

It’s not just obscure films of little interest that are lost: Lon Chaney’s London After Midnight – directed by Freaks auteur Tod Browning — is mostly gone (although it can be reconstructed scene for scene using still photographs), 20 Clara Bow films, The Patriot, directed by Ernst Lubitsch, the adaptation of Edna Ferber’s So Big starring Colleen Moore, and many more are just gone forever.

There are myriad reasons for this. Many of these movies were filmed on nitrate, which deteriorates rapidly and is also highly flammable. In 1935, Fox Studios lost its entire film catalog in a fire, hundreds more were lost in a 1967 fire at MGM studios, in 1978, The Eastman House lost 329 nitrate prints of silent films in another fire. Also, many of the studios just did not invest in preserving these films until it was too late for many of them. Before the advent of television and home video, studios just really didn’t see the point in keeping them around for future release. Notable exceptions are the works of D.W. Griffith, Charlie Chaplin and Mary Pickford, who all took it upon themselves to have their films preserved.

However, one reason that doesn’t seem to be popping up in any of the articles about this is the fact that many of these films were intentionally destroyed. The 1917 version of Cleopatra, starring Theda Bara, was not just lost to time, it didn’t just disintegrate. The two remaining copies of the film were set on fire, purposely, along with most of her other films by Fox Studios after the Hays Code went into effect – as they were deemed too risque for the new rules. Though she made more than 40 movies throughout her career, only about three and a half exist today. Which is only slightly better than the fate of her cinematic rival Valeska Surrat, whose entire oeuvre is lost forever.

The first “lost” film was actually one of the films responsible for the introduction of the code in the first place. Convention City — a slightly raunchy comedy starring Joan Blondell, Dick Powell and Mary Astor — was completely destroyed by Warner Brothers after causing a boatload of controversy. There are, of course, rumors that a cut of the film may exist in Britain, but it’s yet to be found.

Not only were many pre-code films destroyed, many of those that weren’t were sealed up in a vault in 1934, and did not see the light of day until the 1950′s during the television era. However, because said pictures were not “up to code,” many were hacked up and re-edited, the original versions lost forever.

Pre-code Hollywood is especially important from a feminist point of view, because it was basically a golden age of female empowerment. Which, quite frankly, is a lot of the reason the government put the kibosh on it. Luckily, people like David Pierce are working to hold onto the ones we do have, and searching for others that may be stored in random old attics throughout the country.

The country is bracing for a temporary shutdown of the Library of Congress, beginning today. The twenty-five library system will be closed to the public and researchers, according to an announcement on the site you can’t see, and all public events are canceled. The digital collections, online catalog, and “Ask A Librarian” services are temporarily suspended.

Read: How will our country operate without the LOC? | MobyLives

You may also like: Library Services Impacted by Government Shutdown | District Dispatch | ALA Washington