It’s bizarre but true: wire recording is the longest-lasting capture format in audio history, one that paved the way for reel-to-reel tapes and a host of others—even though most people today, and some techies included, have barely heard of it. READ MORE: Forgotten audio formats: Wire recording | Ars Technica


IF YOU WANT to teach your kid about ecology, sustainability, or the future of interactive education, take them to the New York Hall of Science and head for the giant virtual waterfall.

The massive digital faucet feeds the ecosystems of Connected Worlds, a cutting-edge installation that aims to teach youngsters about environmental science by immersing them in it. It’s an interactive simulation big enough to walk around inside—virtual reality that’s not piped into a headset but projected onto a real physical space.

Kids can shape the environment through a clever combination of physical and digital interaction. READ MORE: The Key to Digital Learning? Bring It Into the Real World | WIRED. 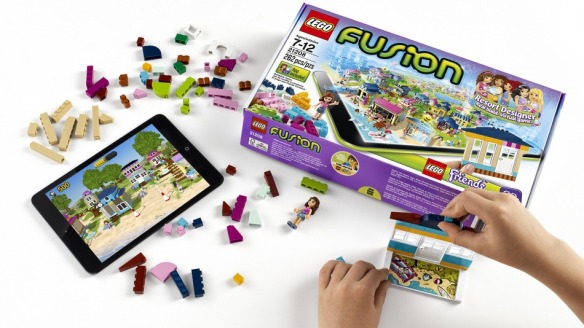 Leave it to Lego to use the word “fusion” correctly. The construction-toy companys new Lego Fusion analog-to-digital game sets are a true blend of real-world Lego building and tablet-app play.

Announced on Wednesday, and shipping in August and September, Lego Fusion boxes each come with 200 Lego pieces. They let you build and play in app-based virtual worlds that include a tower-defense game called “Battle Towers,” a town-building game called “Town Master,” a racing game called “Create and Race” and “Resort Designer.” What you build in the real world can be captured and used in the iOS and Android tablet apps. Each structure then becomes part of the game, and each game can be a part of your world or the larger Lego social community, where others are using their Fusion sets to build similar worlds. Towers can battle towers, race cars can compete against each other and townspeople can take virtual metros to visit other player’s towns.

The renaissance of the long play record isn’t just an anecdotal trend. Even as physical record sales decline, people are buying more vinyl than they have in decades. In 2013, sales increased 31-percent to about 6 million units year-over-year. It’s not a single-year bump either, either. Sales have climbed to 6 million from after having been at about a million in 2007…The “why” behind it, though, is a little more elusive. People don’t have to buy vinyl, and yet, they’re increasingly choosing to do so. It seems that in a world where CDs are obsolete, and digital files are intangible, the vinyl record still has a physical value that gives you your money’s worth. If the music industry wants to survive, it better pay attention to why people are buying records.

Read more: Why Vinyl Is the Only Worthwhile Way to Own Music | Gizmodo