Verdict will have significant reverberations for copyright, DRM and innovation.

No further progress on this case is expected until at least June, but if a boring story about printer cartridges pops up you might want to pay attention. It could be a decision that leads to a virtual DRM on everything. READ : Supreme Court Printer Cartridge Case Could Be the Citizens United of Products | Gizmodo

Despite no study, no public demands, and the potential cost to the public of millions of dollars, the government announced that it will extend the term of copyright for sound recordings and performances from 50 to 70 years…

…Canada will extend term without any public discussion or consultation, yet other studies have found that retroactive extension does not lead to increased creation and that the optimal term length should enable performers and record labels to recoup their investment, not extend into near-unlimited terms to the detriment of the public. For Canadian consumers, the extension could cost millions of dollars as works that were scheduled to come into the public domain will now remain locked down for decades.

Copyright Takedowns on Twitter Are Up 76 Percent | Gizmodo
Twitter just released its latest transparency report detailing government requests for information requests, content removal requests and copyright takedowns. Not just one or two but all three categories are up in the first half of this year.

Tim Berners-Lee warns against governments controlling the Web | CNET
“When you make something universal…it can be used for good things or nasty things…we just have to make sure it’s not undercut by any large companies or governments trying to use it and get total control.”

What Internet Freedom Means to Me (and You) | Information Space
For the fourth of July, I thought it would be fitting (and fun) to get people’s ideas on Internet freedom.

A Map of the Countries That Censor the Internet | Gizmodo
The classification of censorship depends on political censorship like human rights and government opposition, social censorship, conflict/security censorship and various Internet tool censorship.

The Most Convoluted DMCA Takedown Request of All Time | Gizmodo
Anti-Gay group Straight Pride UK is abusing the DMCA takedown process to censor work by a journalist. No surprise there—the DMCA is twisted for all kinds of dumb purposes. The inexplicable part? The hate group filed a takedown on… its own press release. How dare you say that we said the words that we wrote in a press release.

via Google Copyright Infringement Reports to Quadruple This Year | Mashable. 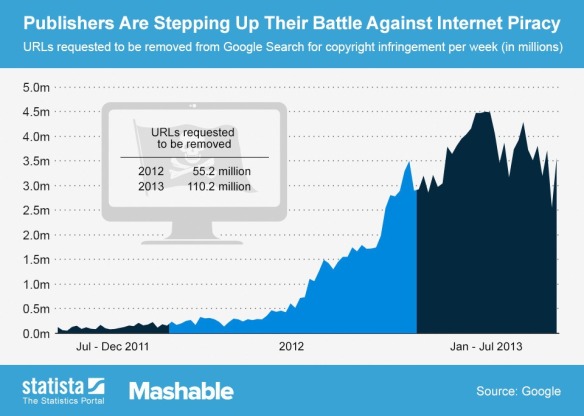 Governments’ Attempts To Censor Google Have Doubled Since 2011 | TechCrunch

For the past few weeks, Mashable has been crowdsourcing a Digital Bill of Rights to highlight the digital freedoms and protections our readers feel each user should be guaranteed as a citizen of the Internet.

After hundreds of comments and contributions on the Google Doc and through social media, a Digital Bill of Rights by the Internet, for the Internet, has been created. The document, though, is a work in progress as more users from across the world continue to include their thoughts and additions to it.

via The State of Digital Rights: A Discussion | Mashable.

Liability Issues Will Plague the Future of Social Media | PCMag.com

“The City of New York and Brookfield Properties has agreed to pay more than $233,000 to settle a lawsuit brought by Occupy Wall Street over the destruction of the People’s Library during the eviction of Zuccotti Park by the New York Police Department last fall. During the raid to clear the park in the early morning hours of November 15th 2011, the majority of the collection of more than 4,000 books donated by the public and organized by the Library Working Group was destroyed or damaged, an act roundly condemned by the  American Library Association, as did the New York Civil Liberties Union and the National Lawyers Guild.” via City of New York settles with Occupy over destruction of the People’s Library » MobyLives.

An informative exposition on the DMCA and security research. I thought the article interesting and a reminder of the power of political and lobbying bodies in the US. In Canada, we are weathering our own struggle against the muzzling of our scientific researchers and librarians by the PMO.

The most recent U.S. proposed law everyone is worried about is CISPA. Here are some links to brush up on what its all about.

Library and Information Services Perspective
What is the Cyber Intelligence Sharing and Protection Act and is it Different than SOPA? from Information Space
ALA Asks Librarians to to Oppose Cypersecurity Bill from The Digital Shift

From the White House
Obama May Back Down from CISPA Veto from PCMag.com SecurityWatch
White House Blasts CISPA, Promises Veto from ReadWriteWeb
President Obama Threatens to Veto CISPA Cybersecurity Bill from Mashable

What is CISPA?
The Non-Geek’s Guide To CISPA, The Cybersecurity Bill The Internet Is Freaking Out Over from Gawker/Business Insider
CISPA: SOPA’s Evil Twin Infographic article from Mashable, infographic from Lumen Consulting
What is CISPA? from Gizmodo