London’s Heywood Hill curates impressive collections for discerning customers in 60 different countries — and specializes in the obscure. READ MORE: The Tiny London Shop Behind Some of the Very Best Libraries | The New York Times

A Japanese bookseller is fighting back against online retail giants like Amazon by buying up a staggering 90 percent of the first printing of a famous Japanese author’s new collection of essays. READ MORE: Japanese Bookseller Buys Almost Every Copy Of New Murakami Book To Protest Amazon | Huffington Post

A bookseller explains how Kamila Shamsie’s call for gender equality in the industry, and the fiery debate it provoked, could lead to greater diversity all around. READ MORE: Battling bias on the shop floor: how bookstores can support diversity | Books | The Guardian

Related: For One Year, This Publisher Will Only Release #Books By #Women | HuffPost #publishing #genderequality 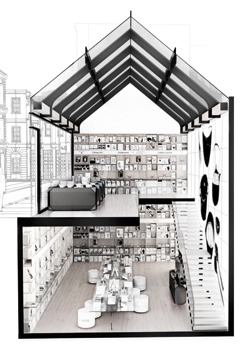 Bookshops are closing down like nobody’s business. So do they need rethinking for the electronic age? Rosanna de Lisle asks four firms of architects and designers to create the bookshop of their dreams

BuzzFeed Decides Criticizing Awful Books Is Too Mean | The Atlantic
Put away the hatchets, BuzzFeed book reviewers. The Internet’s foremost listicle-maker will now be taking its ‘No Haters’ policy over to its rising books section, as BuzzFeed’s new books editor said…that he will only accept warm and cuddly book reviews.

A startup called Zola Books has paired with the popular novelist Audrey Niffenegger, author of The Time Traveler’s Wife, to try to save brick-and-mortar shops.

Read: Can E-Books Save The Neighborhood Bookstore? | Co.Labs ⚙ code + community.

James Patterson said on “CBS This Morning” that he intended to help children become better readers. His announcement comes at a time when one in every seven American adults reads below a fifth grade level.

The bestselling author of the Alex Cross series said, “It’s so easy to get kids reading.” He offered an anecdote about his own son, stating, “When… Jack was 8, that summer we said ‘Jack, you have to read every day.’ And he said, ‘Do I have to?’ and we said, ‘unless you want to live in the garage.'”

Patterson urged viewers to go to local libraries or local bookstores, then made a surprising announcement: Over the next year, the author will donate $1 million of his own money to local bookstores. The only stipulation? The stores receiving donations must have children’s sections.

Indie bookstores and libraries alike have been receiving their fair share of donations from generous individuals; Last week, the Columbus Metropolitan Library broke ground on a new building thanks to a $1 million donation from one of its previous employees.