According to the World Health Organization, more than 1 billion people worldwide have a disability. To Astrid Weber and Jen Devins, Google’s resident accessibility experts, that stat should be stamped on the back of every designer’s hand, because it means that one out of every seven people on the planet is potentially left behind by thoughtless design decisions. At this year’s Google I/O conference in San Francisco, I sat down with the two UX experts and asked them what designers could do to make their apps more accessible. The key, they told me, was using your imagination and having a little more empathy. Here are six ways designers can reach that extra billion.

MicroBLINK PhotoMath Smart Camera Calculator. From PhotoMath.net “PhotoMath reads and solves mathematical expressions by using the camera of your mobile device in real time. It makes math easy and simple by educating users how to solve math problems.”

PhotoMath from MicroBLINK on Vimeo.

Adobes Creative Suite is one of the best software packs out there for professionals, but the suite is prohibitively expensive for most people. If you cant drop the cash, you can still get a similar experience with free or cheap software. Heres how to build your own Creative Suite.

The National Federation of the Blind, the nation’s leading advocate for access to print by the blind, has applauded the release of KNFB Reader, a new app for the iPhone and other Apple iOS devices, which uses the phone’s camera and state of the art optical character recognition (OCR) technology to give the blind instant access to the contents of print materials.

Members of the National Federation of the Blind have worked with KNFB Reading Technology, which developed the app along with Sensotec, KNFB Reader is now available in the Apple iTunes app store. 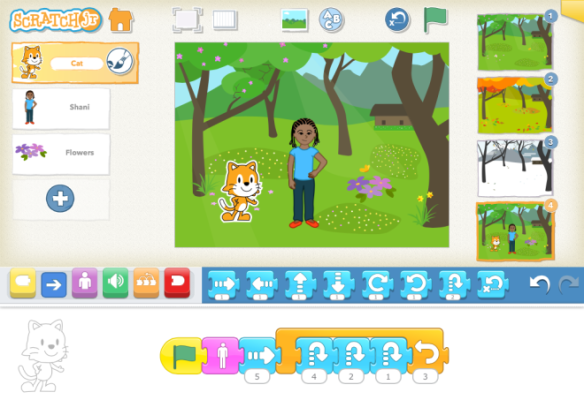 [A] new app might be able to break through that passivity by meeting the Touchscreen generation where their fingers live. ScratchJr is a new iPad variation of the Scratch programming language, a tool created at MIT to help teach kids to code. The premise for both is the same: instead of text, Scratch uses interlocking colored blocks to mimic the logical structures and functions of a typical grown-up programming language. Scratch scripts allow their creators to direct and interact with “sprites”—cartoonish characters on the screen. By introducing kids to coding without the hurdles of arcane syntax and bug-prevention, the hope is that they’ll become engaged enough with the process that their sensibilities will shift.

READ MORE: Finally, a Way to Teach Coding to the Touchscreen Generation | WIRED.

Data surrounds us. It’s everywhere, in the most micro sense small gadgets that track calories we’ve burned, or how much water our plants need to the most macro analytics companies that can monitor, for instance, the health of entire populations. But there are precious few companies actively working on helping us make sense of all that data. One of them is Tableau, a software company that turns heaps of data into visualizations for the common man: teachers, doctors, journalists, you name it. To make those tools clearer and cleaner, they recently partnered with Stamen Design, to release three new map templates, which anyone can play around with by downloading Tableau’s free software.

If youre an aspiring animator, this might be the best news youll hear this month: Pixar is giving away—thats right, giving away—a version of RenderMan, its in-house rendering software. Gratis. No catch. Youll be able to download the program some time in August. READ MORE: You Can Grab Software That Helped Pixar Make Wall-E For Free Soon | Gizmodo

If you’ve been thinking about getting started on the rocket project that’s been on your mind for ages, now is a good time to get serious. Next week, NASA will release a massive software catalog with over 1,000 projects. It’s not the first time the space agency’s released code, but it is the first time they’ve made it so easy.

The breadth and variety of the software projects that NASA’s about to give away are difficult to express. It’s not just a bunch of algorithms and star-finding software, though stuff like that is in there. The crazy geniuses that land rovers on Mars are actually releasing code for ultra high-tech NASA stuff like rocket guidance systems and robotics control software. There’s even some artificial intelligence.

And did I mention it’s all free? Read more: NASA’s About To Release a Mother Lode of Free Software | Gizmodo.

A new iOS app called FireChat is blowing up in the App Store. But it’s not the app itself that’s causing such a stir, it’s the underlying networking technology it taps into.

The idea behind FireChat is simple. It’s a chatting app. After registering with a name — no email address or other personal identifiers required — you’re dropped into a fast-moving chatroom of “Everyone” using it in your country. The interesting aspect, however, is the “Nearby” option. Here, the app uses Apple’s Multipeer Connectivity framework, essentially a peer-to-peer feature that lets you share messages (and soon photos) with other app users nearby, regardless of whether you have an actual Wi-Fi or cellular connection.

If you work with APIs, you already know why they’re important. But the rest of you may well be wondering: What are APIs, and why do we care so much about them?

Read: What APIs Are And Why They’re Important | ReadWrite.